Custom Buttons after Shift OR keeping a keyboard after touch

Custom Buttons after Shift OR keeping a keyboard after touch

I have an issue regarding a possibility to customize the keys after "Shift" (or an ACTION) is pressed. I just upload an example to show it:

I want to switch from: 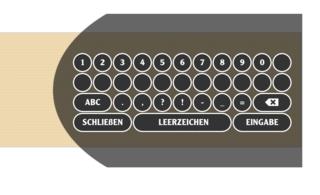 Now every key is a Unicode and the 123/ABC is an ACTION loading another Keyboard .kbl. It works so far, but when I press just one button of the 123 keyboard it jumps back to the abc keyboard. I want to keep the 123 keyboard until I press the ABC button to switch back (so I can enter more than just one number without pressing 123 at the other keyboard again).

How can I solve this? I think easier would be easier to customize the scan codes (somehow capitalize the characters AND altering the "2" of them so they change to 123... after pressing "Shift"), but as there was no way to do this I tried to cheat my way around by using two different .kbl.

I hope someone can help me! Thanks!
Top

Re: Custom Buttons after Shift OR keeping a keyboard after touch

I have solved the issue by using a container and an action which switches the content of the container (I saw it working that way in the default TIKeyboard.kbl).

Nonetheless it would be easier if you would be able to either customize scan codes (or virtual key codes) with a 1, 2 (Shift) and 3 (Alt Gr) or that the loaded keyboard stays after you push one key.

Return to “Problems and solutions”

Users browsing this forum: No registered users and 1 guest